Of Writing Retreats and Missed Deadlines

Ever had so much to do that you just up and decided to flee to another state?

Because that's pretty much what just happened to me.

The only difference here, is that I've fled toward the work in question, and not away from it....

The first draft of Revival's sequel was supposed to be finished today. And, um, well I think it's pretty safe to say I won't be meeting my deadline.

It's my own fault. I allowed myself too much time off in August and then, when the inevitable happened and I ran into problems with Book 2's story arc, I realized I'd made a pretty serious tactical error.

And so (after the inevitable nervous breakdown had come and gone) I decided it was time to shut out the world entirely and get back down to business. I needed a writing retreat, stat.

One of the great things about working from home, is that your office is pretty easy to pack up and relocate.... So I threw two weeks of clothes in the back of my car, packed up everything I needed for writing and work, and I hit the road.

I'm now writing this post from the living room of a cabin in Virginia. 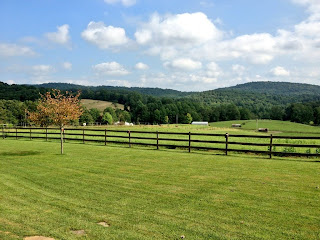 (The view from the front porch. So, basically, I've temporarily relocated to paradise.)


No distractions, no excuses... This book is going to be finished before I leave to head back home.

With a little luck, a lot of work, and a crap-ton of coffee, Book 2 should still be on schedule for a late Fall release! So yay for that.

That said... Break time is officially over for the morning. Time to get back to work!

If you're feeling generous, please send music rec's and positive vibes my way... Something tells me I'm going to need all the help I can get.

And thanks again for all the support, everyone! You guys rock!
Posted by Jena Leigh at 10:41 AM