Of Tea Parties and Goofy Hats

I went to a tea party themed bridal shower last weekend.... And it was awesome.

And not just because it was a bridal shower for one of my besties, the food was phenomenal, and everyone had a fantastic time...

I mean, there was that too.

We were given hats to wear.

Now, I'm not usually a fancy hat sort of person. (See my introductory post.) If you stick a hat on my head (and it isn't a ball cap), I'll either take it off and whack you with it, or I'll grudgingly wear it, but will straight up refuse to be seen in public.

And trust me. You wouldn't want to be seen in public with me in a hat, anyway. I look ridiculous. And that can only reflect badly on you and your ability to choose friends.

So when I arrived early to help set up the shower and was immediately shown to a large basket overflowing with vintage hats... Well, I might have made a face.

Not a pretty one, either.

I plucked the first hat from the pile that didn't have a wide brim or a giant bow tacked on top, stuck it grudgingly on my head and then wandered back into the kitchen... Where I was immediately complimented by two different people on my choice in headwear.

Confused at this unfamiliar reaction to someone seeing me in a hat, I sought out the nearest mirror.

I immediately fell in love with that goofy hat. And the best part? The owner was so thrilled that we loved our hats that she gave them to us! I got to keep it!

You know those crack-filled e-mails I write to friends? Well the second I made it home I knew I had to write to Carrie and show her this impossibly fantastic hat.

...But being the loser that I am, I forgot to take pictures during the shower.

Desperately in need of photographic evidence to support my argument regarding the hat's utter awesomeness, I did what any person with access to an iMac camera would do.... I immediately used photo booth to take my picture.

Only, it didn't exactly go as I planned on that first take.

Y'see, just before I clicked the button to snap the photo, Pandora started playing Wagner.


It took me half a second to identify.

In that half a second, my face went from photo-ready smile to... Well, to this: 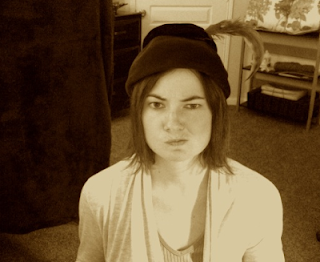 I gave serious consideration to using it as my icon. Still might.

Eventually I got my hands on copies of the bridal shower photos... But that photographic outtake might just be the best picture I'll ever take of that hat.

In case you're curious, here's what the hat looks like in color: 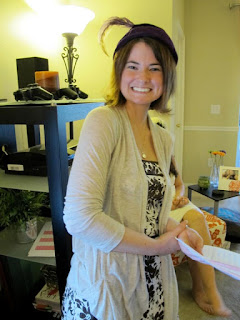 (It's purple! And it has a feather! I seriously need to reconsider my previous statements regarding plumage.)

And for those of you curious as to what, exactly, a tea party bridal shower looks like... Well, it looks a lot like this: 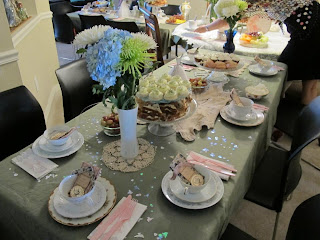 And, yes. Those scones and finger sandwiches were just as tasty as they appear in the image.

This tea party thing ain't half bad, y'all.