A Quick Update and Some Magic

I picked a terrible week to be held accountable for my writing progress. Really. Epic miscalculation on my part.

This is the first day off I've had since last Saturday, and I still spent a few hours at work this morning, getting a whole host of things finished so that I could take a day off without worrying too much about being gone. Definitely looking forward to some down time! (And, fingers crossed, some uninterrupted writing time, as well.)

In the end, I hit my goal of 30,000 words, but only barely—and only because I gave myself a few extra days to hit the mark.

If I don't update this progress bar next Friday with a number over 35K, I'll... I'll... I don't know. Subject myself to some form of punishment, I suppose. Going to have to think on that one. Suggestions?

On a completely random note, I'm beginning to think my laptop wants me to finish Book Three as much as you guys do. My desktop image is programmed to change every minute, shuffling through roughly a thousand images that I have saved in my desktops folder... and yet, for some unknown reason, this guy has been popping up every time I minimize Scrivener. 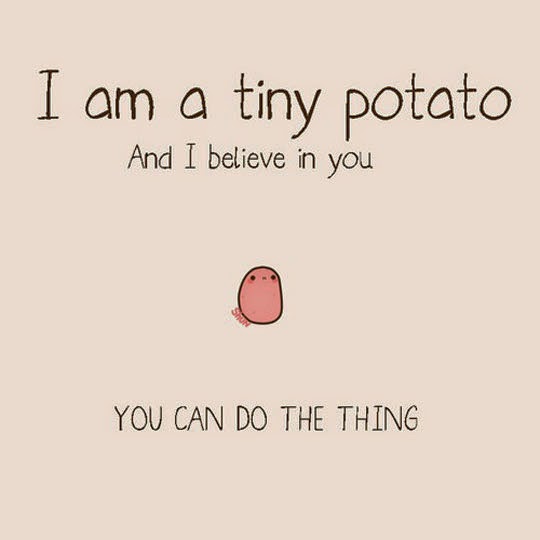 I have to admit. He's flippin' adorable. And a delightful motivator.*

With a tiny potato cheering me on, how could I possibly fail?

Also, it looks like the Jena Leigh page on Facebook is still gaining likes, slowly but surely. I'm thinking about doing some sort of giveaway once we hit 500 (and perhaps a second giveaway, if we ever reach 2,000 followers on Twitter.) Going to have to come up with something fun for a prize!

And stuck in my head this weekend, is the band Magic!—a band that you've almost definitely heard, if you've turned your radio to an alt-rock or pop station at all in the last few months. Their hit song Rude sucked me in, and now their album Don't Kill the Magic is my new obsession. Catchy, beachy and fantastic. The healthy dose of reggae in their songs makes Don't Kill the Magic the perfect summer album. I kind of adore these guys. They're like... like the Police meets Sublime, mixed with a little bit of Bruno Mars and some Bob Marley thrown in for good measure.

Anyway. Enough fangirling. Have a couple songs and a wonderful weekend, my loves! See you next week!

*If you know who created this image, please let me know so I can add the source info! Thanks!