Of Giveaways and Happy Hearts

Hey guys! In a recent post I mentioned that the Jena Leigh page on Facebook was still slowly gaining likes, and that I hoped to do a giveaway once we hit 500. And we will! As soon as that 500th fan clicks "like," I'll put together something special for my Facebook followers...

In the meantime (to help us get a little closer to that goal of 500 likes), I'll be running a giveaway here on the blog! (And sorry international folks, but this time around it's just for residents of the US and Canada... One day, I'll be able to afford to ship these prizes anywhere in the world! Until then, I just can't swing it. Not to fret, though—I'll be doing another giveaway soon that will be open worldwide! So stay tuned!)

The prize up for grabs this time is a signed paperback copy of Resistance (The Variant Series, #2), along with two Variant Series bookmarks, and a $10 Barnes and Noble gift card!

Yep. On August 11th, I'll be giving away a whole bunch of goodies to one lucky reader who enters the Rafflecopter giveaway below! So be sure to enter for your chance to win!

I made sure there are plenty of ways for you to rack up points—and let's face it, since the giveaway will be exclusive to the Jena Leigh blog, in all likelihood there will be roughly five entries all together. Like, total. So if you do enter, the odds will definitely be in your favor. Just sayin'... :)

I've written and rewritten this part of the post roughly four times, now.

It's not that I don't have anything to say. I can think of plenty. It's just that all the things I'm inclined to tell you about are coming across as either whiny or depressing. Or both. And that's not the sort of post I wanted to make today. So instead, let's just summarize the bad as quickly as possible so we can move on to some more enjoyable stuff, shall we?

The situation in a nutshell is this: For the next month or so, I haven't a snowflake's hope in Hades of meeting my current writing goals without subjecting myself to a mind-numbing stretch of extreme stress and sleep-deprivation. One that will likely result in my health taking another nosedive.... and/or a full-on nervous breakdown. Whichever comes first.

There are only so many hours in the day and—sadly—I haven't yet figured out how to clone myself.

As soon as we get this store up and running (and have hired enough help), I'll be settling back into my normal writing routine and that shiny purple progress bar for Book 3 will be back on the blog!

Until then, for the sake of my sanity, I'll be writing what I can, when I can, and trying very hard not to feel guilty about it.*

So, in case you hadn't noticed, half of my tweets lately have consisted of pins that caught my eye on Pinterest.... The other half, of course, are the exceedingly random posts I found amusing on Tumblr.

Lately the Internet has surpassed both books and TV as my chosen method of work-related detox.  I've noticed that when I finally make it home in the evenings I'm too tired to even watch a 30-minute-long television show, much less compose a pithy collection of words in 140 characters or less. So recently my online presence has taken on a less direct form... Reblogs.

Cause, y'see, making an intelligent comment when you're half dead and longing for sleep is hard. Scrolling through a mind-boggling number of pins and posts, however, is as easy as dragging your thumb across a cell phone. And that, I can totally handle.

Out of all my pins and posts this week I stumbled across a couple of favorites I thought I'd share with you here on the blog.

First up is this little gem Wil Wheaton reblogged on Tumblr... 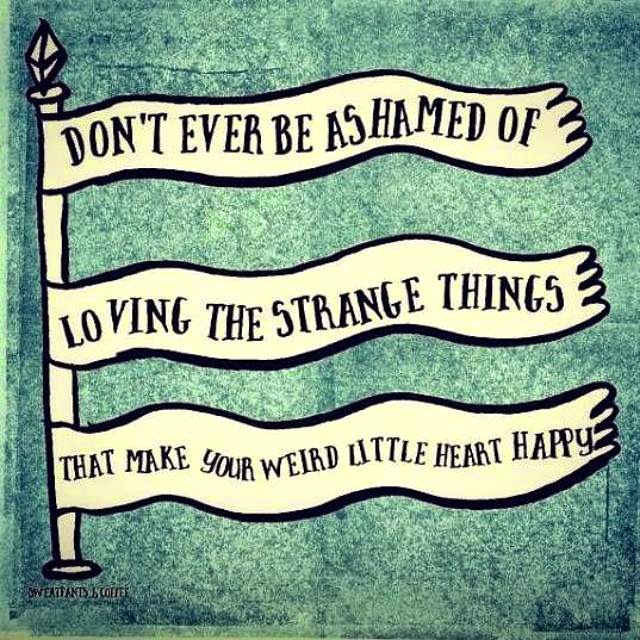 (It's sadly lacking a source, though the name at the bottom reads "Sweatpants & Coffee". If you know its origin, please send me a link!)

You know what I say to that? You should feel absolutely no shame at all in reading whatever you like—whatever makes you happy. And if other people don't like it, they can stuff it.**

I can't tell you how many times I've had adults (most of whom are aged mid-40s and above) approach me and tell me how surprised they were that they enjoyed my book.

"I saw the Young Adult label and just assumed it was for kids," they'll say. "I wasn't expecting to enjoy it so much, at my age!"

But that's the thing.

YA, middle grade, children's stories... It doesn't matter what the age classification is—a good story is a good story.  If the story is enjoyable, meaningful, relatable, or clever, it can easily transcend the limitations of its assigned age level.

So should I, as an almost-30-year-old, be embarrassed to wander the YA aisles at my local bookstore? Should I be ashamed to be seen reading a Harry Potter novel or Maggie Stiefvater's latest book in public?

Of course not. If someone has a problem with it, then that's their problem, not mine.

An age classification is a suggestion, not a rule. And thank God for that. I shudder to think what amazing adventures I might never have experienced, and all the extraordinary characters I might never have met, had I followed those so-called "rules."

Anyway. That's my two cents' worth.

...I've shared a Tumblr reblog, so let's wrap this section up with my favorite pin from last week:

(Love this. Surreal and brimming with possibilities... Oh, the stories I could write...)


Stuck in My Head

Two songs this week, the first is a song from Swedish DJ Avicii, with vocals provided by my favorite voice in bluegrass music today—Dan Tyminski. (You might recognize his voice from the song "Man of Constant Sorrow" off the Oh Brother, Where Art Thou? soundtrack.) The song's called "Hey Brother" and is from the Avicii album True.

Next up, it's absolutely the most oddball song I've heard in ages. Over the course of the last few days, it's inspired some glorious off-key shower vocals, as well as some horrendously awkward dancing in my car... And all I can say is, thanks, Pandora. Thank you for always playing the weirdest songs imaginable in my QuickMix. You provide me with so much awesome $#!@.

What's not to love?

Okay, guys. Time to wrap up this monster of a post!

I'm working on another post about my writing process that I hope to publish here on the blog in the next week or two, but either way, you'll hear from me again next weekend. Hope you all have a fantastic week! :)


*I haven't stopped writing. Far from it. I wrote another 800 words, just this morning. I merely need to give myself some room to breathe and take a break when I require it. The "accountability" method is wonderful and effective, and I'll be returning to it ASAP... Just as soon as my other responsibilities calm down a bit. In the meantime, I'll continue trudging along, even if I'm not talking much about my progress. :)

** Yeeeahhh. What I really wanted to say to that included a lot more cursing and a few obscene gestures. None of which translate well on a blog where the appropriateness rating is traditionally kept at PG-13 or below. But you get the picture.
Posted by Jena Leigh at 3:25 PM